Big News: Your Local Government Has a Tiny House

Nicole Nolen
Comments Off on Big News: Your Local Government Has a Tiny House
3 min read

What comes to mind when you think about a tiny house? Downsizing, simple living, composting toilets? That show on HGTV (how do they fit the camera crew in there anyway)? Would you believe us if we told you that Mecklenburg County government has a tiny house of our own? The tiny house phenomenon is not a new one, but it’s definitely a novel idea in local government.

Why Does Mecklenburg County Have a Tiny House? 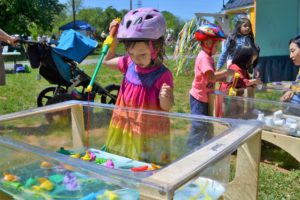 There’s one key difference in our tiny house: it isn’t for living — it’s for playing! It offers a fun, “sensory-friendly” experience for children with disabilities and their typically developing peers. The tiny house exists because of agrant with the National Park and Recreation Association (NRPA) and The Walt Disney Company. They wanted to give money to community projects that would provide inclusive play for children from 4-8 years old. So, the Therapeutic Recreation team in Park and Rec began brainstorming ideas. They knew they needed to think of a play experience that would be easy to transport from one place to another. First, they considered a trailer with equipment but that didn’t seem especially creative, so they considered a food truck-style playground before finally landing on an idea they loved: a tiny, mobile “sensory playhouse.” They weren’t the only ones who loved the idea — NRPA and Disney ended up selecting their proposal!

What’s So Special About the Tiny House? 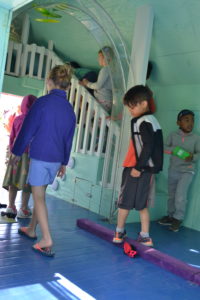 The sensory playhouse incorporates elements like a climbing wall, crash pad, and water bead table. There are elements (like the loft and water bead table) that provide a play experience for children who are easily overstimulated by too much sensory input. These features are quiet, calming and reflective. Other children may have limited sensory opportunities because of a disability, and for them the structure has elements that target as many senses as possible. Many researchers believe we have at least 21 senses, which is a lot more than we learned about in school! These include sense of balance and sense of time.

Where Can I Get My Own Tiny Playhouse? 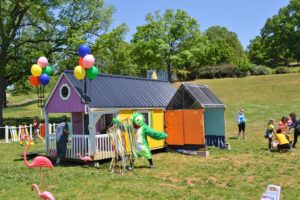 Does the idea of a mobile playhouse inspire you to have one of your own? You’ll either need money or advanced DIY skills! Our playhouse began as a simple, run-of-the-mill storage building that the Park and Rec team purchased from a local builder. Once our park operations staff got their hands on it they had to weld a frame to keep it stable on the road. Then, they brought Therapeutic Recreation staff’s ideas to life, building a true mobile playground for children with disabilities. If that sounds like more work than you’re up for, maybe you’re not destined to have a tiny playhouse of your own. But, here’s the good news: our tiny house may end up in a park near you for a few days! You can’t request it for events, but they are open to suggestions for park locations to visit! Want to get your closest park on the schedule? Let us know on the Mecklenburg Park and Recreation Facebook Page or on Twitter.

5 Things to Value About the 2019 Revaluation

Plant This, Not That: A Guide to Native and Invasive Species